So this week was a triple shot espresso courtesy of Marvel. First, they gave us ...


Oh wait, that's not the female Thor they were rolling out soon. So apparently, Thor (the Thor we all know and love, that lout) will become unworthy of Mjolnir, and thus another hammer-bearer is needed. Apparently also, Beta Ray Bill was not answering his phone.

All bets are on the recently-acquired comic character/property Angela as the new Goddess of Thunder (what if it was Sif all along?). And although they say she "... isn't a temporary female substitute", how many issues or months would you bet before Thor Odinson regains the hammer? I'll wager less than 3 years, for one big crossover again.
Not too surprising is the ascension of Sam Wilson as the new (albeit temporary, i dare you challenge me) Captain America. I was thinking they would find a cure for Steve Rogers' dilemma in time, but I guess this was one of those insidious long-term plans concocted during one of those Marvel retreats. And why not? Marvel's batting average has been on the rise in the last 14 years.


Lastly, we are going to have an Iron Man that's "... hard to root for." Yes, the return of Drunk Tony!! Oh, wait, its going to be a Superior Iron Man. Hubris will be the norm, as Tony apparently continues the legacy of Steve Jobs (in more ways than one) and kind of forces his vision on the world (or in this case, San Francisco) because he knows he's right. You know he's always right. He may have gone too far with his Illuminati machinations, but .... you know he's right.

October can't be too far away. Enough time to grab the popcorn eh? 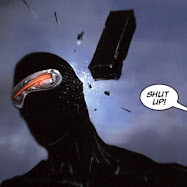 This work is licensed under a
Creative Commons Attribution-Noncommercial-No Derivative Works 2.5 License.